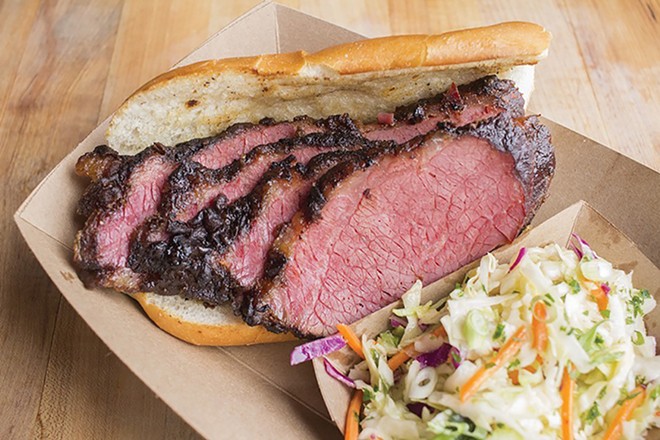 The Stellar Hog’s corned beef brisket is some of the best bar food you will find in St. Louis.

When it comes to the food, we’re trained to expect Slim Jims out of a plastic container or, if it’s a classy spot, TJ’s frozen pizza. What’s less common, however, are dive bars that serve truly outstanding food — food that’s not good because it’s served at a bar but delicious in its own right.

Such culinary greatness may seem antithetical to the essence of a dive, but it exists! From soulful Korean cuisine to crispy fried chicken to gravy-smothered hamburger steaks the size of your face, a handful of the area’s most beloved watering holes serve delectable dishes every bit as respectful as what you’d find at a dedicated eatery, and with a lot more color.

Here are our picks for the metro area’s ten best dives to get a good meal. The hospitality at these unassuming watering holes may be more Busch Light than Cabernet, but they’ll make you feel as if you’ve stumbled upon a top-secret dining experience. 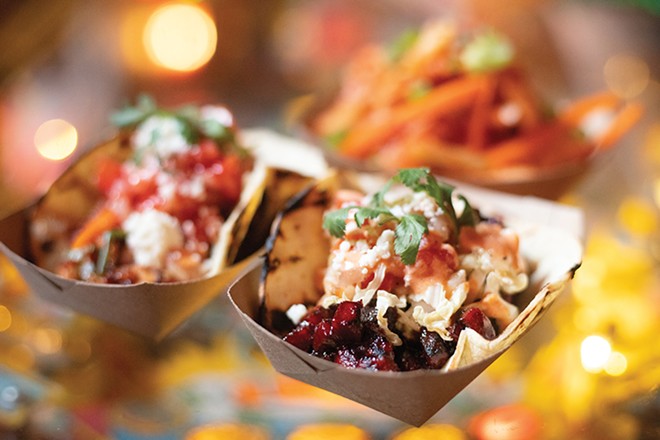 Aside from the dings of its many pinball machines, the most popular sounds you’re likely to hear at the Silver Ballroom (4701 Morganford Road, 314-832-9223) are the “oohs,” “ahhs” and “good grief this is delicious!” coming from diners feasting on Melanie Meyer’s outstanding Korean cuisine. Meyer’s fast-casual restaurant, Tiny Chef, may look like an order counter inside the Bevo Mill neighborhood pinball dive, but once you taste her inspired, Korean-fusion dishes, you’ll understand how her immense talent dwarfs such humble digs. Meyer’s cooking draws upon her experiences as a Korean American adoptee, and she sees Tiny Chef as a way to connect with her Korean culture. Our suggestions? Enjoy the thoughtful cuisine while shooting Jager and hitting the AC/DC pinball machine!

The vintage Stag sign and boarded-up windows might make BJ’s Bar & Restaurant (184 West Washington Street, Florissant, 314-837-7783) seem like an unwelcoming place, but the moment you wander into this longtime Florissant watering hole and smell the warm, slightly funky scent of molten cheese and deep-fried t-ravs, you’ll feel right at home. This quintessential corner tavern is known for its cheap mason jars of draft beer, but also its pizza, a riff on the cracker-crust, sweet-sauced St. Louis-style staple but with one important difference: It’s made with mozzarella. Whether or not this qualifies as a true St. Louis pie is up for debate, but that’s a debate the longtime regulars will gladly welcome you over to their table to have. 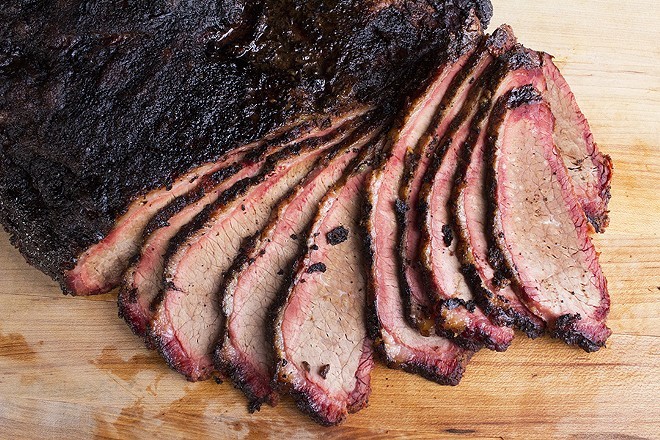 The Stellar Hog serves some of the best brisket in town.

One of St. Louis’ oldest bars, Super’s Bungalow long existed as a refuge for the blue-collar workers of deep south city to shake off their days over a frosty Busch among friendly faces. That still holds true, though now, the bar is home to some of the best barbecue in the region, operating as the Stellar Hog (5623 Leona Street, 314-481-8448). In March 2016, Super’s was purchased by Alex Cupp and his family for the dual purpose of maintaining the historic integrity of the bar and using the space to launch Cupp’s barbecue project. The resulting restaurant, the Stellar Hog, has gone on to become one of the area’s most beloved bastions of ‘cue and thrust Cupp into the mix of St. Louis’ most renowned pitmasters. After Super’s and Stellar Hog temporarily shut down in January 2021 because of the pandemic, Cupp was unsure what the bar’s future would hold. Ultimately, when he reopened the south-city flagship a year later, he consolidated the name, dropping the Super’s moniker even as he committed to making sure its spirit lives on. Thankfully, no matter what you call it, this St. Louis landmark shows that you can both change and stay the same if you have the right touch. 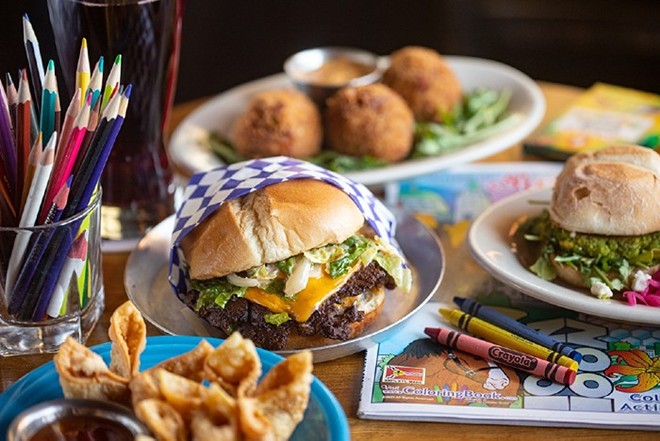 
The former home of longtime south-city dive bar Ryder’s Tavern, The Drawing Board (4123 Chippewa Street, 314-899-9343) has carried on its predecessor’s boozy spirit while upgrading its culinary game. Anchored by the cooking of chef Alexa Camp, the Drawing Board offers an elevated take on classic bar food, like homemade crab Rangoon (made with real crab!), jambalaya balls, excellent burgers, chicken chili and smoked meats. Thanks to owner Paul Wamser, who owned the building when Ryder’s closed and was determined to breathe new life into the space, the Drawing Board has quickly become a warm gathering place that puts a delicious spin on an old city dive without taking away from its charm. 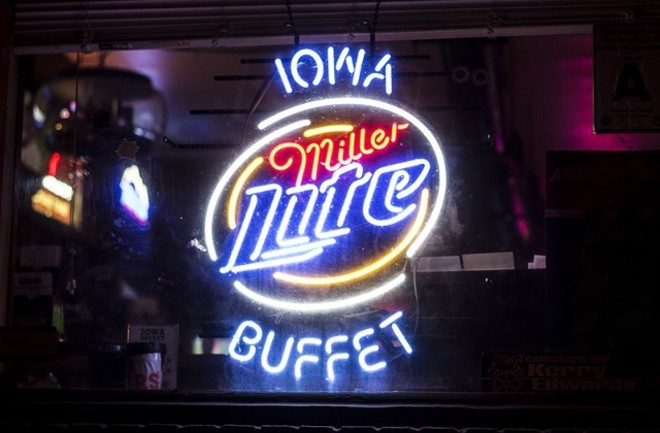 Iowa Buffet may not be an actual buffet, but it’s burger is a thing of beauty.

Named after Iowa Buffet’s (2727 Winnebago, 314-776-8000) original owner Henry Koziacki, the Hank Burger is as beloved a south St. Louis institution as the bar itself. The burger, cooked to order by the barkeep right in front of you, is nothing fancy — just a ground-chuck patty, dressed with the usual trimmings and served with some fries or onion rings. But there is something about having this searing hot sandwich served right off the grill tip in such an unassuming spot that makes it special. Though Iowa Buffet serves food items including ham and cheese, wings, chili and even barbecue on most Saturdays, no one would ever call this bar a restaurant. That unexpectedness is the key to its beauty. 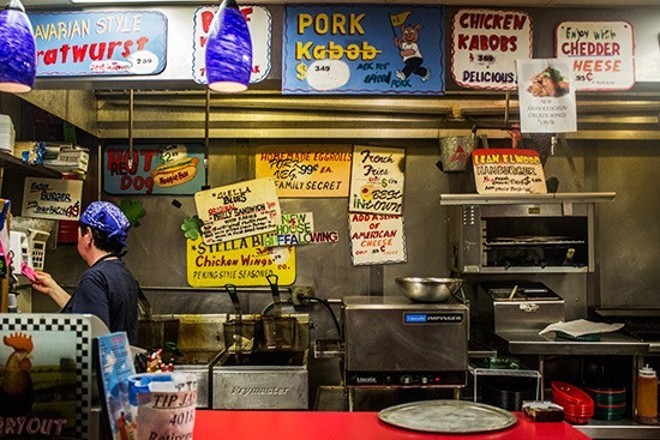 Stella Blues is the Fast Eddie’s of south city.


Known by many as the “Fast Eddie’s of south city,” Stella Blues (3269 Morganford Road, 314-762-0144) is a quirky, tchotchke-filled, cash-only Korean dive bar whose food is every bit as vibrant as its eclectic setting. Beloved for its wings (which it boldly claims to be the best in town), bulgolgi cheesesteaks, kabobs and fried pickles, this bohemian gathering place’s cheap eats, cold drinks and party atmosphere make Stella Blues more than a Tower Grove South institution; they give diners a reason to travel far and wide to experience a quintessential taste of the south side. 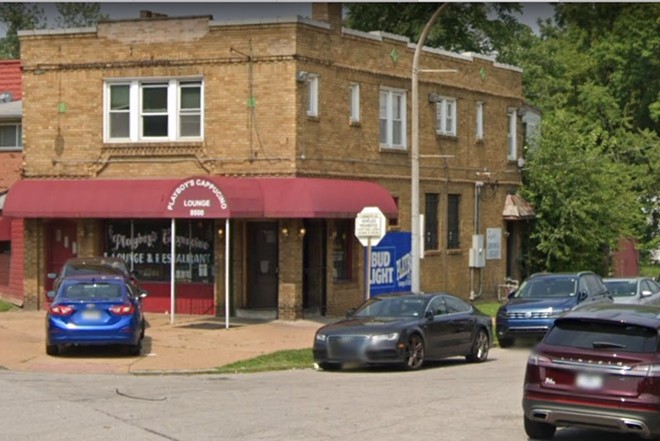 The name might evoke a silk-robe-clad barista frothing pitchers of milk, but Playboy’s Cappuccino Lounge (8500 North Broadway, 314-869-4098) is known for a much different sort of experience. Instead of espresso beverages and scones, this North Broadway mainstay serves ice-cold beers and what those in the know consider to be the area’s best fried shrimp. These plump golden beauties, served searing hot straight from the fryer with a side dish and some sliced white bread, need no adornment, though a dunk in the pickle-flecked tartar sauce is hard to resist. 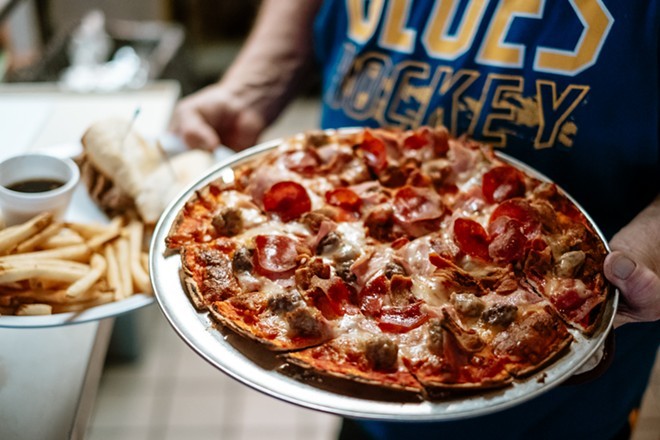 Fergie’s wide-ranging menu offers something for everyone.

More like a church basement potluck than a formal dining establishment, Fergie’s Bar & Restaurant (1699 Lemay Ferry Road, 314-638-6387) is said to have some of — if not the — best fried chicken in the city. You wouldn’t expect such deep-fried culinary glory to come from such unassuming digs; Fergie’s old brick building, vintage Budweiser signs and ’70s-era stained-glass light fixtures read like any other old-school watering hole. However, the unmistakable smell of sizzling bird that hits the moment you walk in lets you know you’re not just in any old dive. From the red checkered tablecloth covering the serving station to the crockpot that sits atop it, this delightfully homey spot is the sort of bar that fills your cup with much more than just draft beer. 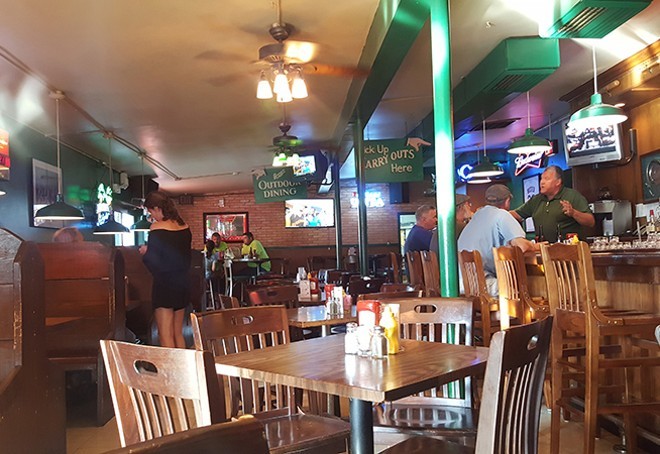 The culinary delights at Gregg’s Bar & Grill (4400 North Broadway, 314-421-1152) are so tasty and numerous they almost disqualify this North Broadway establishment from dive status. Ribeyes, chicken-parmesan sandwiches, catfish platters and roasted top-round-of-beef platters evoke the staples of a truck stop serving up country cooking. But it’s the unassuming, low-key vibe and vintage watering-hole touches that keep Gregg’s true to its dive-bar roots, no matter what’s coming out of its kitchen. 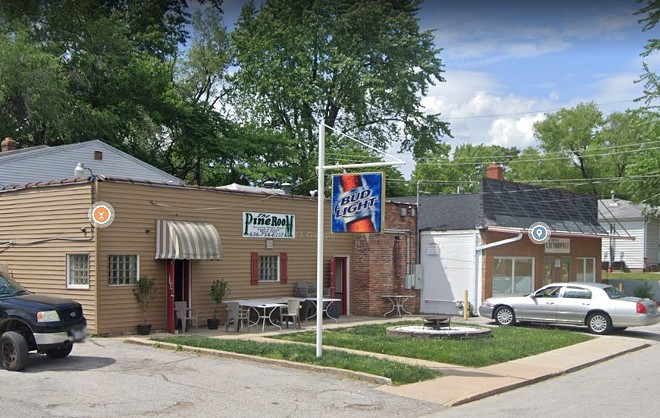 The Pine Room is the quintessential St. Charles neighborhood spot.

In recent months the Pine Room (1102 Perry Street, St. Charles; 636-754-6237) has given itself a bit of a facelift, shaking off its smoke-filled, wood-paneled past in favor of new laminate flowing and shiplap. The changes may be a bit jarring to the Busch beer crowd, but thankfully the longtime St. Charles establishment has kept one thing the same: its hamburger steak. Covered in mushrooms, onions and thick brown gravy, this mammoth meat patty has been packing ’em in for decades. It’s seriously majestic — what Salisbury steak would be if Paul Bunyan cooked it himself — and steals the show from the bar’s more refined steak offerings. That’s right; the Pine Room has an entire menu filled with fine cuts of beef served with a foil-wrapped baked potato and, hopefully, a winning Club Keno ticket. Is there a better steakhouse experience?

We are always hungry for tips and feedback. Email the author at [email protected]

Spearheading Sports Quality
We use cookies on our website to give you the most relevant experience by remembering your preferences and repeat visits. By clicking “Accept All”, you consent to the use of ALL the cookies. However, you may visit "Cookie Settings" to provide a controlled consent.
Cookie SettingsAccept All
Manage consent