A client asked last week if I could suggest any veggie burgers or other plant-based meat alternatives. I had to admit I haven’t taken a close look at this category, but it seemed like we were due.

Plant-based meat alternatives are more widespread than I realized. In North America, sales rose 37% from 2017 to 2019, driven by a desire for more sustainable as well as healthier food.

A recent report predicted that alternative proteins will represent 11% of all protein consumed by 2035 globally if current trends continue, and even more if investors and regulators support their development.

That’s a lot of veggie burgers! Plus imitation chicken, sausages, cheese, even fish… the offerings are staggering. I was going to tackle the whole category here, but there’s too much! Today we’ll just talk veggie burgers.

Are they really healthier? But they’re so processed!

On the other hand, research links so-called “ultra-processed foods,” such as veggie burgers, to increased cardiovascular disease and mortality.

So plants helpful, processed not so helpful. Where does that leave us?

No question you’d be better off making a homemade veggie burger, or grilling a portobello mushroom, although you’d still need protein from somewhere. Bean salad perhaps?

But I like to meet people where they are. Say you do want a quick burger. That leaves us with two questions:

Are you better off with a beef or plant-based burger?

I think we have to give this one to the veggie burgers. Researchers randomly assigned volunteers to eat either meat or imitation meat products at least twice a day for eight weeks. The meat was mostly beef and pork, and not lean.

Some cardiovascular disease risk factors, including cholesterol and weight, improved slightly after eight weeks on the plant-based foods, while others were similar.

This study used Beyond Meat products, which can hardly be considered the heart-healthiest veggie burgers out there, with their coconut oil driven saturated fat content and highly processed ingredients. If they can edge out beef and pork, imagine if you had one of the burgers below. (There aren’t any head to head studies that I’m aware of.)

Other heart-healthier alternatives to beef burgers are salmon (like this or this), turkey, and chicken burgers.

If you go for a veggie burger, which one? 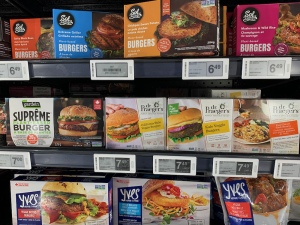 Somehow we have to figure out which ones are less processed. The broad “ultra-processed” category includes foods as diverse as soft drinks, candy, and frozen pizza. Some of those foods are clearly more problematic than others.

It’s tricky because we don’t know exactly why ultra-processed foods may cause health problems, but we have some clues…

Ultra-processed foods are engineered to taste great. Once we start eating it can be hard to stop, thanks to strategic use of sugar, salt, fat, and flavourings, as well as a shortage of fibre and protein, two nutrients known to help us feel full. And they often incorporate more partially broken down food, so-called “food isolates” like methylcellulose or potato starch.

All of this add up to eating more than we need when ultra-processed foods are on the menu.

To make this objective, I also looked at four numbers that we can easily check:

That’s Health Canada’s definition of “high” fibre, and an indication of those plant-based ingredients we want more of: legumes, whole grains, nuts, seeds, and vegetables. Fibre can help us feel full, lower cholesterol, and is associated with lower rates of heart disease.

Again, that’s Health Canada’s definition for “low saturated fat.” While the link between saturated fat and heart disease is tenuous, and based more on the whole food package than the numbers alone, it’s a good way to root out cholesterol-raising coconut oil, which is the major source in most veggie burgers.

Even if you don’t have high blood pressure (yet), it’s a good idea to avoid excessive sodium.

240 mg is higher than Health Canada’s “low sodium” (160 mg), because using that would have left us with just two: Dr. Praeger’s California Style and the Big Mountain Foods Original Veggie Patty. I do have those on my list, but I wanted a few more options.

The number 240 mg comes from the fact that a medium-sized whole-wheat hamburger bun adds about 260 mg of sodium, bringing the total to 500 mg, which you might recall is the rule of thumb I use for any given meal. (Of course cheese, ketchup, mustard, and pickles can all add more, but I had to draw the line somewhere.)

More would be better, but you’ll get about seven grams from a bun and about six grams if you use cheese, bringing us into the range that helps with satiety and muscle building. (If you don’t use cheese you might want to look for more elsewhere.)

Plus the X-Factor – ingredients

Assessing how ultra-processed a food is just from the ingredient list is a bit subjective, but I took a stab at it.

The number of ingredients I’m not worried about. Just like you can make soup (or homemade veggie burgers) from 15-20 ingredients at home, if they do it at scale and freeze it, I’m not so concerned.

Also, just because an ingredient is unfamiliar or hard to pronounce doesn’t necessarily mean it’s problematic. Cyanocobalamin sounds dodgy, but it’s just vitamin B12. Caramel colour, on the other hand, which sounds innocuous, has been called possibly carcinogenic by the WHO.

If you want to check an additive, the Chemical Cuisine directory from the non-profit Center for Science in the Public Interest is a good place to look.

But I did look for those food isolates, especially high on the ingredient list, which is sorted in order by weight. Plenty of ingredients like maltodextrin, modified cellulose, and potato starch were a red flag.

Of the foods that scored three or four points based on their nutrition facts, I jettisoned two based on ingredients: Walmart’s Great Value Ultimate Meatless Burger and Save On Foods’ Western Family Black Bean Chipotle Veggie Burgers.

So what did that leave us?

I was pleasantly surprised to find that a few products did meet my criteria!

(Note that I limited this to three stores I can easily search online: Superstore, Walmart Canada, and Save On Foods. I’m sure I’ve missed some, but you can use these criteria to evaluate options in your local market.)

In the descriptions below I’ve mentioned which products are gluten-free and/or vegan, not because they make the product healthier, but because those things are important to many people. 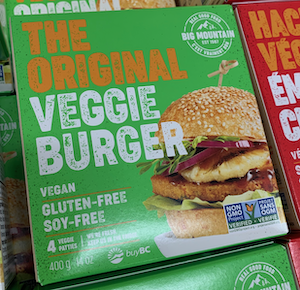 Found at: Save On Foods, Superstore, Safeway

This is the only product I could find that scored on all four of my criteria. Yay! I found them in Superstore near the tofu, near the produce. Thirteen grams of fibre, be still my heart. (From ingredients like split peas, green peas, sunflower seeds, organic chia seeds, and pea fibre.) 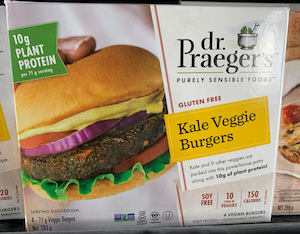 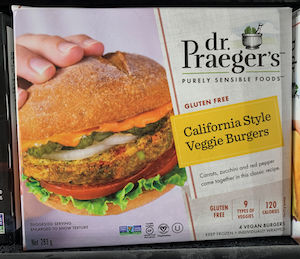 The Kale Veggie Burgers would have had four points too except they’re just a hair above my (admittedly arbitrary) sodium target, at 260 mg instead of 240 mg. They have 10 grams of protein, thanks to pea protein.

The California Style burgers are truly low in sodium but unfortunately lacking in protein. Think of this as a veggie burger actually made (mostly) of veggies, with the first five ingredients being “Carrots, Onions, Green Beans, Gluten Free Oat Bran, Zucchini, Peas.” Great but you’ll definitely need to look for protein elsewhere. 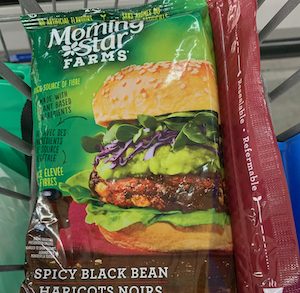 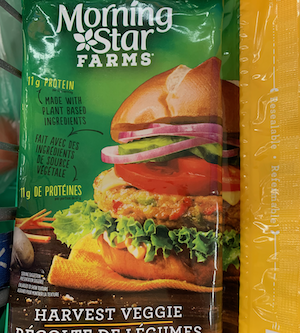 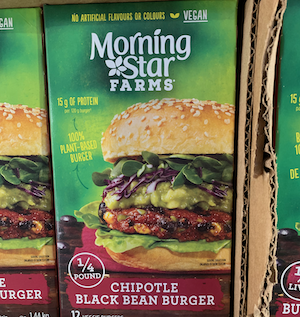 Neither gluten-free nor vegan

Morningstar Farms has more veggie burgers, but these were the ones I could find locally that got three points: Harvest Veggie Burger, Spicy Black Bean Veggie Burger, and the Chipotle Black Bean Burger, which I could only find at Costco.

They’re all high in fibre and low in saturated fat. The Spicy Black Bean is just a hair low in protein, but okay for sodium.

The other two which were the opposite, higher in protein but also a bit higher in sodium.

Either way, all three make the grade in the heart health department.

These use soy protein, but don’t let that put you off. Concerns are largely unfounded and it may even help lower cholesterol.

How would a lean beef burger compare?

For comparison, the lean frozen beef patties I highlighted in my last post, about label-reading, would score one point by this criteria. It’s too high in saturated fat and sodium, and lacks fibre (we wouldn’t expect any from beef).

If you made one from scratch with lean beef that would score two points, assuming your sodium was lower.

But how do they taste?

That’s the big question, right? They have to taste good, although personally I find most veggie burgers fine if pan-fried or grilled until crispy and paired with a good bun and all the fixings.

Anyhow, I haven’t taste-tested all of these, but I will, and I’m hoping you can help!

If you try one of the brands above, can you comment in our Facebook group about what you thought? Give it a score from 1 (terrible) to 10 (I’ll happily give up beef burgers). Or you can send me an email if you’re not on Facebook.

I’ll compile answers and share them here in an update in a few weeks. Sign up to get the emails if you don’t want to miss it.

If you only have a burger occasionally, go with what you prefer! It’s unlikely to make a big difference one way or the other.

But if you like a quick veggie burger and want to choose a relatively heart-healthy one, these options or similar products are among the best bets.

What meat alternatives should I tackle next? Let me know what you’re interested in.

As always, this post is not sponsored. I even turned down an offer for free samples. 😉  Here to bring you independent guidance.